John 1:5 "And the light shineth in darkness; and the darkness comprehended it not."

A second Georgian tribal union emerged in the 13 th century BC on the Black Sea coast under the Kingdom of Colchis in western Georgia. The ancient Greeks knew of Colchis, and it featured in the Greek legend of Jason and the Argonauts, who travelled there in search of the Golden Fleece. Starting around 2000 BC, northwestern Colchis was inhabited by the Svan and Zan peoples of the Kartvelian tribes. Another important ethnic element of ancient Colchis were Greeks who between 1000 and 550 BC established many trading colonies in the coastal area, among them Naessus, Pitiys, Dioscurias, Guenos, Phasis (modern Poti), Apsaros, and Rhizos (modern Rize in Turkey). In the eastern part of Georgia there was a struggle for the leadership among the various Georgian confederations during the 6th – 4th centuries BC which was finally won by the Kartlian tribes from the region of Mtskheta. According to the Georgian tradition, the Kingdom of Kartli (known as Iberia in the Greek-Roman literature) was founded around 300 BC by Parnavaz I, the first ruler of the Parnavazid dynasty. 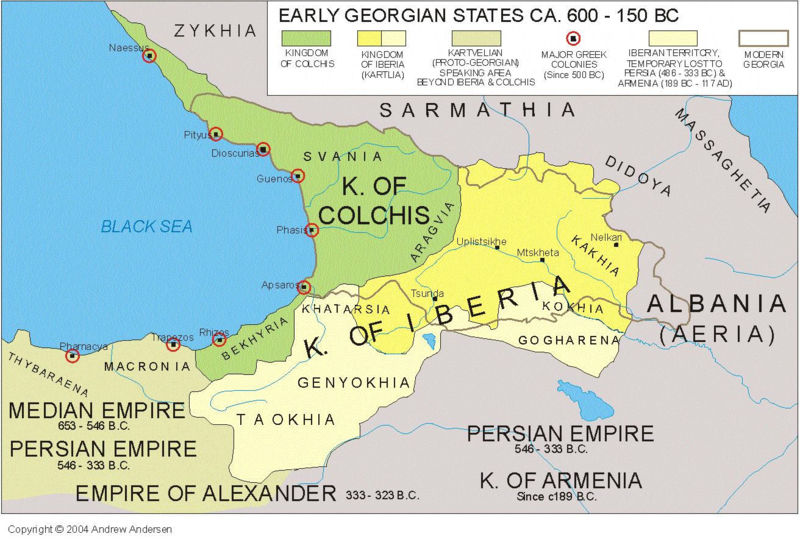 Georgian Kingdoms of Colchis and Iberia 600-150 BC, Andrew Andersen


Between 653 and 333 BC, both Colchis and Iberia survived successive invasions by the Median Empire, and later the Persian Empire. At the end of the 3d century B.C southern Iberia witnessed the invading armies of Alexander the Great, who established a vast Greco-Macedonian empire to the south of the Caucasus. Neither Iberia nor Colchis were incorporated into the empire of Alexander or any of the successor Hellenistic states of the Middle East. However, the culture of ancient Greece still had a considerable influence on the region, and Greek was widely spoken in the cities of Colchis. In Iberia Greek influence was less noticeable and Aramaic was widely spoken.


Between the early 2nd century BC and the late 2nd century A.D. both Colchis and Iberia, together with the neighboring countries, become an arena of long and devastating conflicts between major and local powers such as Rome, Armenia and the short-lived Kingdom of Pontus. In 189 BC the rapidly growing Kingdom of Armenia took over more than half of Iberia, conquering the southern and southeastern provinces of Gogharena, Taokhia and Genyokhiaas, as well as some other territories. Between 120 and 63 BC, Armenia’s ally Mithridate VI Eupator of Pontus, conquered all of Colchis and incorporated it into his kingdom, embracing almost all of Asia Minor as well as the eastern and northern Black Sea coastal areas.